Gender equity refers to men and women’s fair treatment according to their respective needs, whether equal or different, provided it is equivalent in terms of rights, benefits, obligations, decisions, and opportunities (Pipeline Equity, 2018). In agriculture, it captures the fairness of treatment for men and women according to each gender’s agricultural needs, as well as constraints, inherent in the inequities which prevail and vary across cultures, and how to address these gaps. The implications is women’s empowerment in agriculture in terms of whether and how women control productive resources (e.g. land, livestock, seeds, fertilizers, machinery, financial assets, and agricultural incomes) (CGIAR, 2014), addressing the current inequities found in control of such resources in agricultural systems (Fletschner and Kenney, 2014).

Enhancing women’s empowerment in agriculture enhances households’ food security since there are interlinkages between the latter and women’s access to and control over agricultural assets, inputs, food productions, (Njuki, J., J. R. Parkins & A. Kaler, Eds. 2016). However, to enhance rural households’ food security, gender equity and women’s empowerment also calls for non-farm activities (Mellor, 2017). In Sub-Saharan Africa, in general, non-agricultural income has a significantly stronger association with food security among female-headed households (Ciza et al., 2021) or those in poorer regions, than it has among male-headed households and those in richer regions (Dzanku, 2018).

In South Kivu, DR. Congo, 37% of households generate part of their income from non-farm activities and use 75% of it towards food items, including non-agricultural foods since they can afford them, which substantially improves their food security. Conversely, 63% depending solely on agriculture for their livelihoods had a critical level of food security, not reaching 2400 kilocalories per day per person. Non-agricultural income is thus important for households since it contributes significantly to the economy of rural households and enhances their standard of living and food security (Ciza et al., 2021). But women have no access to sources of such income and credit institutions are less open to them than to men (Mellor, 2017). Therefore, besides access to agricultural assets and inputs for enhancing farm productivity, gender equity in agriculture should enhance women’s access to economic support through microcredit schemes for off-farm income generating activities. In Kenya, this has afforded a shift from women’s roles as supporters to new ways into public spaces and gendered opportunity spaces among final decision-making men (Bullock & Tagbaru, 2019, 1). 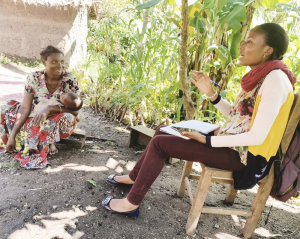 Interviewing a participant regarding women’s agency in household
income management and decision-making in DR Congo.