Micronutrient deficiencies, especially vitamin A deficiency (VAD) remain a public health problem in Sub-Saharan Africa and Central Africa, the prevalence of VAD significantly exceeds the WHO threshold point of 15%, with countries such as DR Congo (DRC) recording prevalence as high as 64% (IFPRI, 2016).

Among the numerous strategies that have been employed in the fight against VAD, reports indicate that food-based strategies are the most sustainable, especially among rural communities dependent on agriculture for both food and income. Therefore, the Alliance of Bioversity International and CIAT, under the framework of CIALCA, and with support from both HarvestPlus and CIALCA has been using banana as an entry point to addressing VAD in Burundi, Democratic Republic of Congo (DRC), and Rwanda.

The focus on banana was informed by: 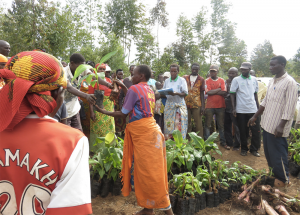 Vitamin A rich banana distribution to farmer households in Burundi. (Photo by Alice Simbare/Alliance of Bioversity International and CIAT).