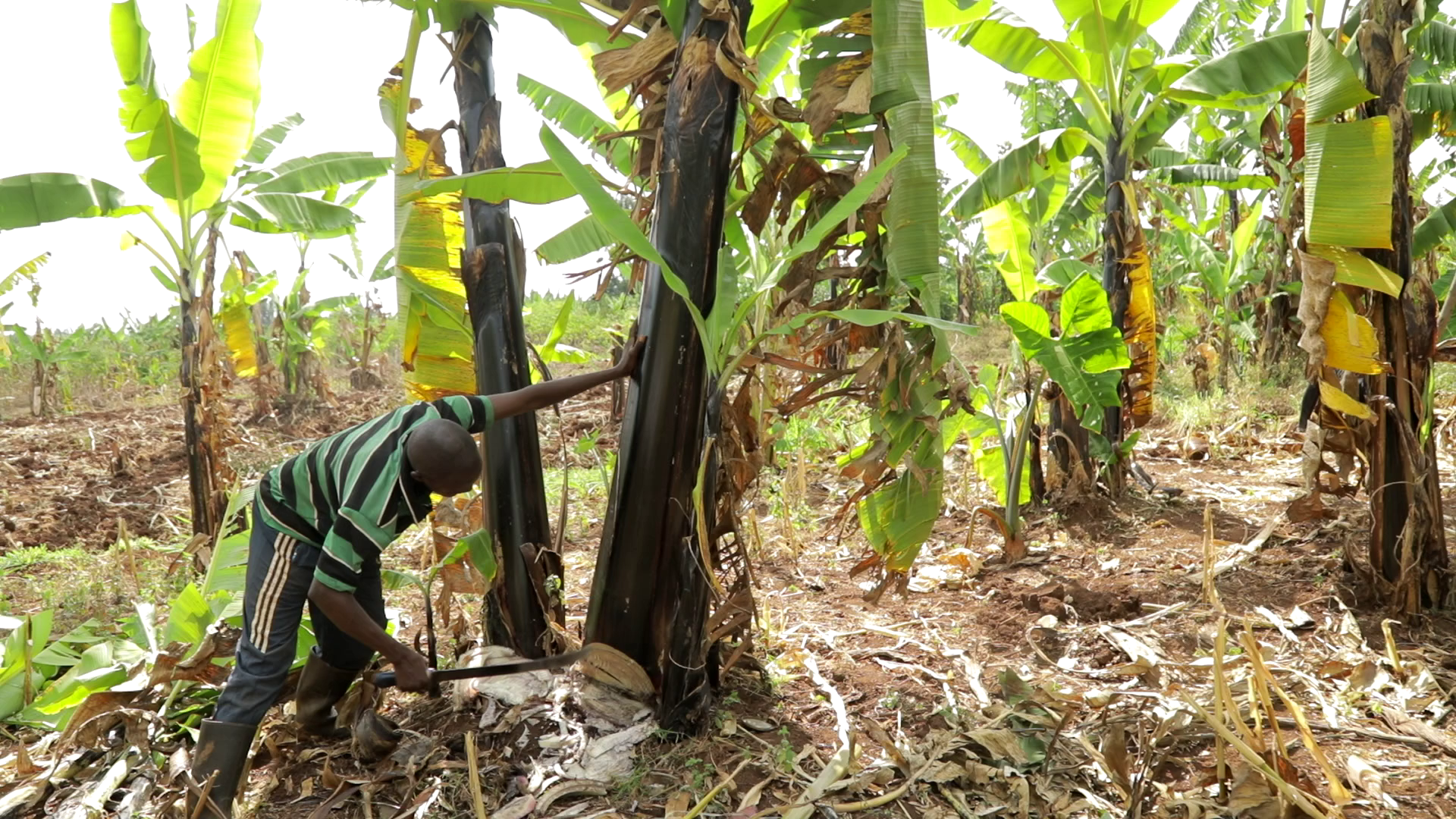 Banana is a major commodity in Rwanda, used as both a cash and (staple) food crop; it covers 23% of Rwanda’s land and is grown by 90% of households. Rwanda is one of the largest producers of bananas in the Eastern Africa Region and ranks second in banana consumption in the world with an annual per capita consumption of approximately 144 kg.

Xanthomonas wilt of banana is a bacterial disease that has seriously affected banana production in the East and Central African (ECA) region. Yield losses of up to 100% have been reported in the ECA region. The disease was first discovered on Enset (a banana-relative, also called false banana) in Ethiopia in 1967, and first spread to ECA region (Uganda) in 2001. In Rwanda, BXW was officially reported in 2005, and is reported to have caused reduced availability of banana in households and in markets and, thus, is a large threat to food security and income. 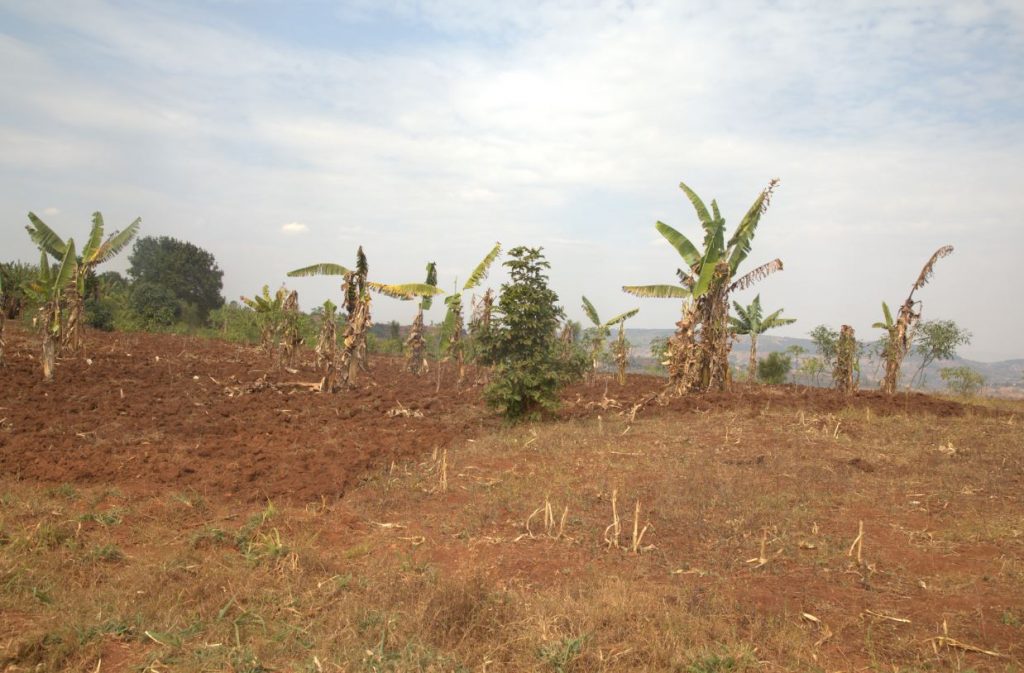 Photo 1: Xanthomonas wilt of banana causes yield losses up to 100%

There is no cure for BXW, but scientists have formulated technical recommendations to reduce the probability of infection and to manage and control existing infections.

The Government of Rwanda set up various approaches to address BXW such as working through Umuganda, a monthly holiday of community service in Rwanda, where people uprooted infected banana mats and buried them in the soil. This practice to control BXW is referred to as “Complete Diseased Mat Uprooting (CDMU)”.

In Rwanda, Complete Diseased Mat Uprooting (CDMU) has been proposed as the only correct measure to control BXW, but it has only been partially effective because it is costly, time consuming and severely affects the continuity of bunch harvests.

A novel technique to control BXW in banana, called Single Diseased Stem Removal (SDSR), developed and tested by the Alliance of Bioversity International and CIAT in neighboring countries over the past years, has recently been tested at field sites in Rwanda and showed good results.

SDSR is a disease management practice to control BXW and recover banana production rapidly. Instead of uprooting the whole sick banana mat, only the stem of a plant that is showing symptoms of BXW is cut at soil level. It is recommended to support SDSR by sterilizing garden tools used for cutting diseased stems, either by holding the tool in fire for up to a minute or by cleaning it with soap and water or chlorine. Ideally, this work is associated with the removal of the male floral bud after formation of the last cluster on the bunch, using a forked stick.

The Alliance of Bioversity International and CIAT conducted the study on the SDSR technique in Rwanda, in partnership with the Rwanda Agriculture and Animal Resources Development Board (RAB) and the International Institute of Tropical Agriculture (IITA) through the CGIAR Research Program on Roots, Tubers and Bananas (RTB) flagship project.

The trials were set in four sites located in the districts of Kayonza, Gisagara, Rulindo and Rubavu. Objectives of the study were to: 1) assess the potential of both CDMU and SDSR in controlling BXW under Rwandan agro-ecological conditions, and 2) conduct a cost-benefit analysis for both technologies, measuring time needed and labor costs to apply the technology and banana bunch harvests/yield.

The results from the research show that in all four sites, both SDSR and CDMU were highly effective in halting the disease: disease incidence dropped below 1% by the end of the first month. In subsequent months, during which the banana plants were regularly monitored for symptoms of BXW, incidence remained below 2% when either SDSR or CDMU was applied on, respectively, sick plants or mats.

This was a marked difference from the plots with BXW where no techniques were applied to control the disease. In these plots, incidence rapidly increased in the first month at all four sites with an average of 7.5%. 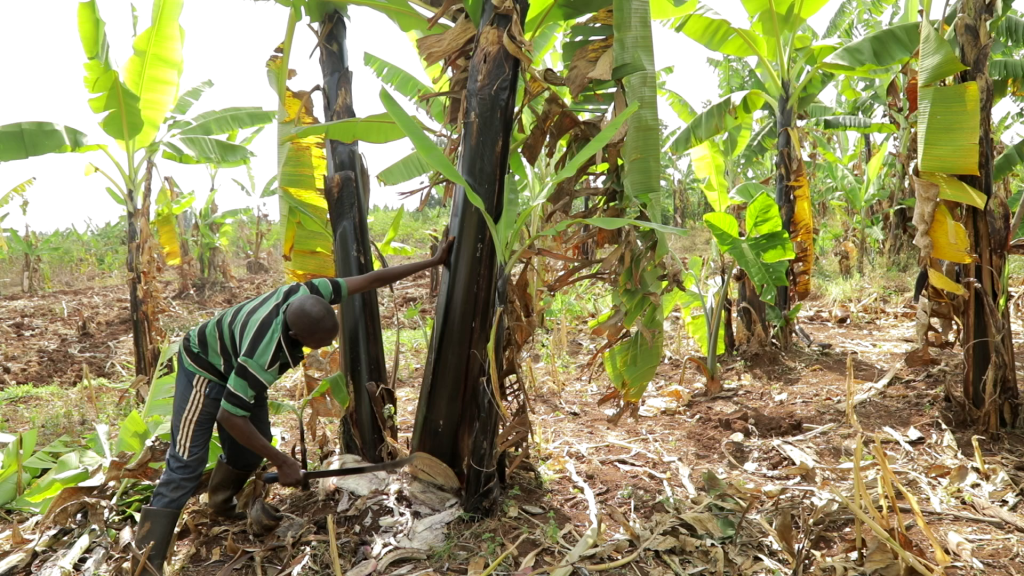 Although disease incidence declines were similar for both BXW control technologies, it is important to note that in the CDMU plots, all plants in a sick banana mat were uprooted whereas in the SDSR plots all healthy-looking plants were left in place, leading to continued bunch production. For banana farmers, this makes an enormous difference.

Moreover, the results show that SDSR takes much less time than CDMU. The total time (cutting/uprooting, processing plant debris and even replanting in the case of CDMU) needed for SDSR is 88% lower compared with CDMU, averaging 4.3 ± 0.3 minutes treatment time for removing one affected plant, compared to 36.5 ± 4.5 minutes for uprooting one affected whole mat. It logically follows that the labor costs associated with CDMU are much higher.

Scientists recommend the SDSR technique to control BXW to Rwandan banana farmers, because it is easy to apply and highly effective in controlling and halting the dissemination of BXW in banana gardens.