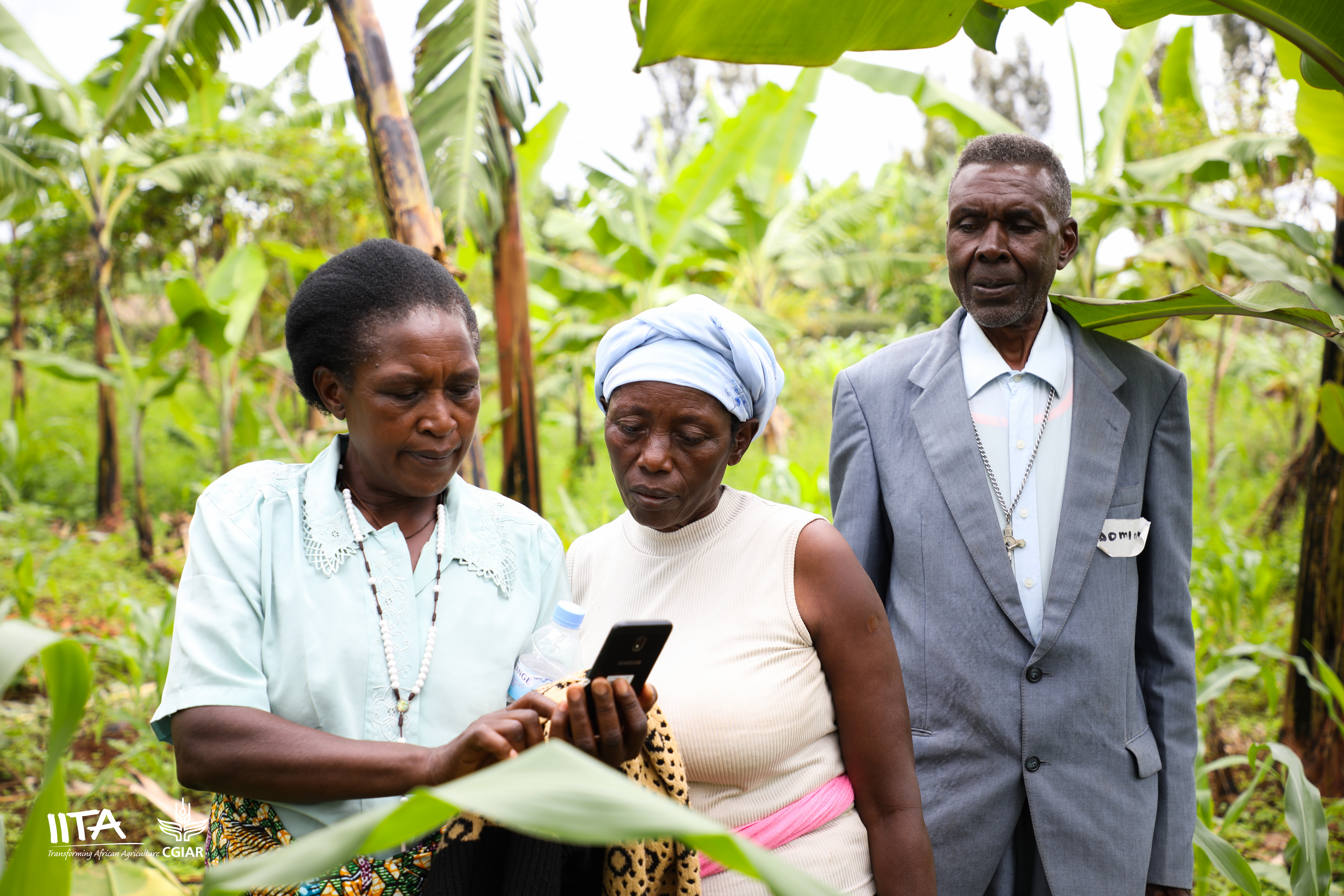 The Consortium for Improving Agriculture-based Livelihoods in Central Africa (CIALCA) has prioritized innovation and scaling as one of its key Pillars. In this perspective, CIALCA is closely supporting the development of a digital tool for surveillance and control of Banana Xanthomonas Wilt (BXW) in Rwanda as part of a GIZ-funded project called ICT4BXW.

“ICT4BXW builds on important scientific research that was conducted under the umbrella of CIALCA. Through ICT4BXW Application, CIALCA aims to promote the Single Disease Stem Removal (SDRS) which consists of timely removal of only the diseased banana stem, to allow the other stems to remain growing and productive, which of course has positive impacts on the farm household’s food and income security” says Dr. Marc Schut, CIALCA coordinator and among the initiators of the ICT4BXW project.

The ICT4BXW project is led by the International Institute of Tropical Agriculture and is being implemented in collaboration with several partners, including Rwanda Agriculture and Animal Resource Development Board (RAB), Bioversity International and Leibniz Institute of Agricultural Development in Transition Economies (IAMO) with financial support of Deutsche Gesellschaft für Internationale Zusammenarbeit (GIZ). The project aligns with the ICT for Rwanda in Agriculture (ICT4Rag) Strategy 2016-2020 by the Ministry of Agriculture and Animal Resources. ICT4BXW will serve more than 5,000 farmers across Rwanda to better diagnose, control and prevent Banana Xanthomonas Wilt in their banana plantations.  The BXW Application provides a stepwise digital approach that empowers farmers to diagnose BXW in their fields and take immediate control action. The data feeds an early warning system to combat the disease and prevent its spread.

The ICT4BXW Application is now available on Google Play store, and any compatible android smartphone user can access, download, and use it to systematically diagnose BXW in banana farm and access state of the art banana management advice. The BXW App is being tested in 8 districts of Rwanda, including Gatsibo, Kayonza, Muhanga, Gisagara, Rulindo, Burera, Karongi and Rubavu with 69 Rwandan Farmer Promoters. However, any interest users across the country can now access and use the application, which is configured in the Rwanda national Kinyarwanda language.

“We think you cannot control what you cannot monitor. So we are convinced the first step in controlling BXW is to develop a functioning and automated system that enables real-time reporting and monitoring of the disease incidences, and empowers observers (farmers or any citizen) on the field to deploy relevant control measures,” says Dr. Julius Adewopo, who is leading the ICT4BXW project.

During a field visit to one of the districts for the testing of BXW Application, farmer promoters noted that the App has greatly facilitated their role, and improved their engagement with farmers to provide credible advisory support for banana production.

“Before this App for BXW was introduced to us, we were using papers, and walked long distance to report. Now we diagnose and report BXW incidence through the App (and phone) immediately. Moreover, when we are training farmers using the ICT4BXW Application, they are easily convinced, as they see that the information we are giving them are sourced from a credible source by going through all the steps together, seeing pictures that are displaying in the phone, showing various steps that are followed until it tells that the banana stem does not have BXW or it does,” Umutoni Mathilde, Farmer Promotor in Kayonza District said.

The 69 farmer promotors have been trained under this project have been also equipped with smartphones to facilitate their implementation of this pilot exercise.

“This application is helping to eyewitness the real signs of BXW in banana field. Before the BXW App, one would confuse BXW signs in a banana stem. For example, the plant sap that comes when you cut a banana stem, you would be confused whether it has BXW or not. But with BXW Application, it shows photos of how the infected plant sap looks like, in order for a farmer also to compare the signs in the App and what is on cut banana stem, then decide of BXW appearance in the field.” Emphasized Murenzi Vianney, Officer in charge of Agriculture in Kayonza District.