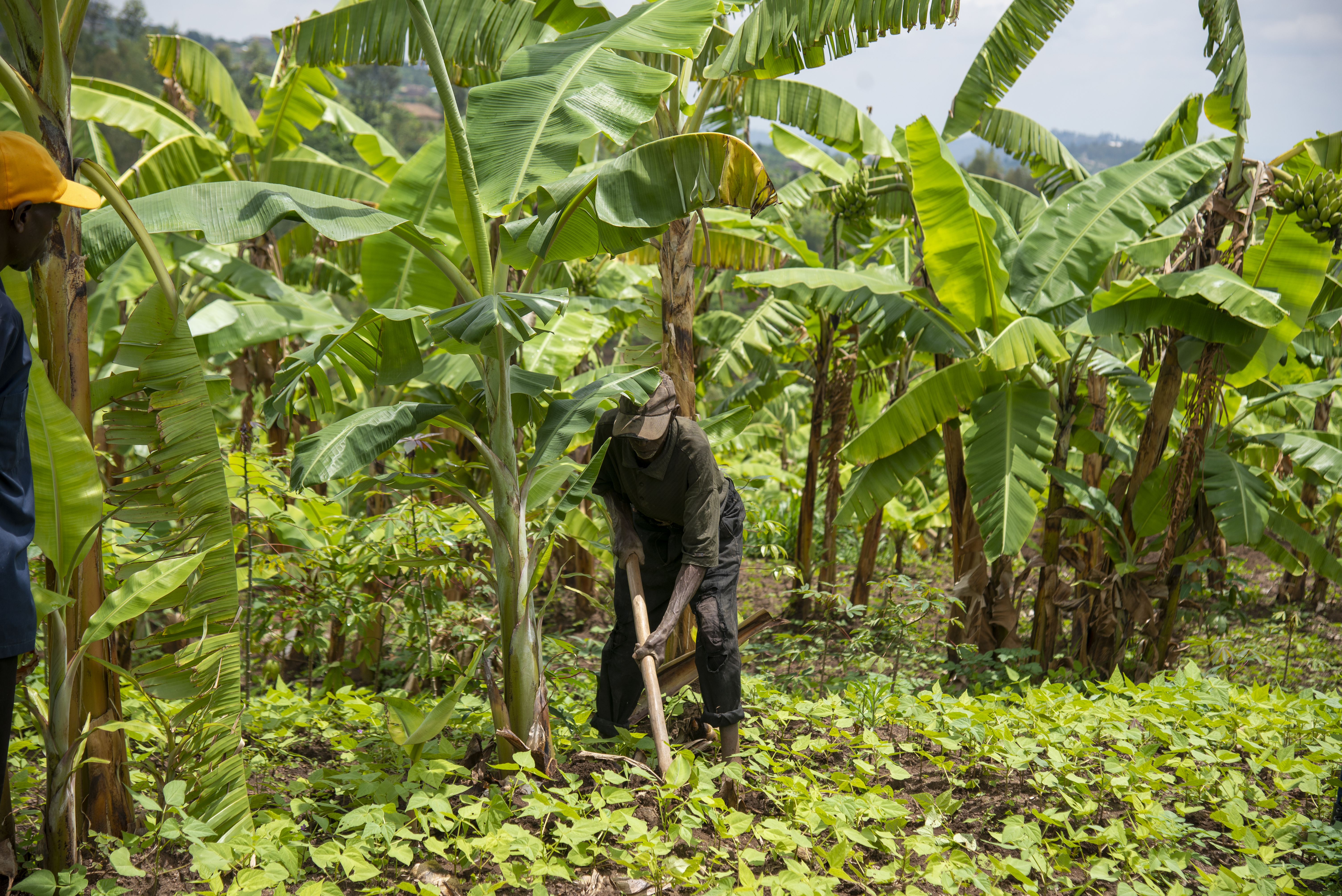 Rollout of development interventions using a one-size-fits-all model can achieve economies of scale but can neglect the variability in farm and farmer characteristics. A data-driven approach to incorporate farmer diversity in scaling strategies may help to achieve greater development impact, researchers from the International Institute of Tropical Agriculture (IITA), the International Livestock Research Institute (ILRI), One Acre Fund, and the Consortium for Improving Agriculture-based Livelihoods in Central Africa (CIALCA) have concluded. 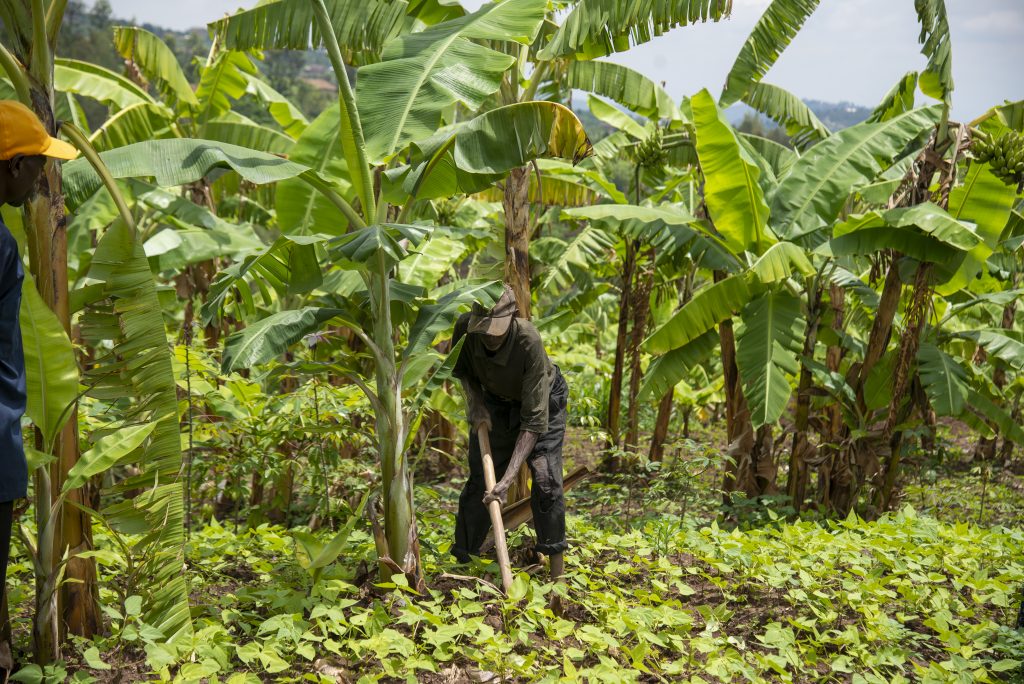 Photo: Extending typologies along the scaling pathway can improve interventions and farmer livelihoods

Titled “Towards actionable farm typologies: Scaling adoption of agricultural inputs in Rwanda,” the research suggests that reorientation of farm typology methodologies could finesse the scaling strategy of extension to achieve greater impacts.

Published in Agricultural Systems (https://bit.ly/3guWWbO), the research was performed in Rwanda, where nearly 3000 households were surveyed across 17 districts of the Western, Southern and Eastern Provinces of the country. The research developed typologies along the axes of prosperity and adoption of inputs, with the latter referring to fertilisers and improved crop varieties. Ten farm types were identified, where the key differences along the prosperity axis were land area cultivated and livestock owned, and the key differences along the adoption axis were perceptions of input efficacy, access to training, and education level.

While researchers agree that rollout of development interventions using a one-size-fits-all model can achieve economies of scale, they argue that it neglects the variability in farm and farmer characteristics. The research promotes a data-driven approach that incorporates farm diversity in scaling strategies to achieve greater development impact.

“Single strategies are easier to scale, but may be inefficient in terms of impacts when compared to more nuanced ‘tailored’ approaches. We demonstrate that a typology based-approach can inform the scaling of development activities and be used by implementing organisations to tailor their intervention strategies.” expounds Dr. Rhys Manners, research team member from IITA Rwanda.

The research presents important findings for scaling partners and development organisations as extending typologies along the scaling pathway can improve interventions and farmer livelihoods.

The work includes novel findings for the body of research on typologies in the scaling of interventions. The use of typologies for informing the scaling of development activities in Rwanda is an under-researched area. Further, there is little published work in Rwanda (or beyond) on how insights derived from typologies are taken up and applied by implementing organisations. This research suggests that, by using typologies along the scaling pathway, scaling organisations can effectively address the aspect of what can be done to achieve greater impact with chosen interventions. 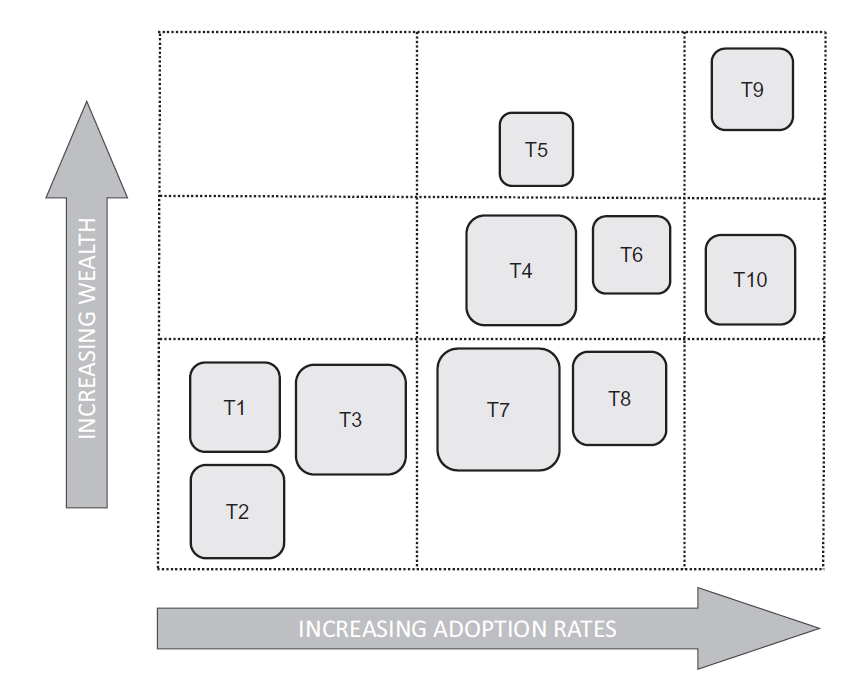 Graph: The farm types (T1-T10) plotted along two axes: the horizontal axis shows an increasing degree of adoption of inorganic inputs and improved seed, and the vertical axis shows a gradient of wealth. The dashed lines imply step changes between farm types along those axes. The sizes of the boxes for each farm type indicates the predicted prevalence of that farm type, relative to one another. Further details on the farm types (T1-T10) on https://bit.ly/3guWWbO

The findings are practically useful to farmer-centric scaling organisations like One Acre Fund, a key partner in this research.  Reacting on the utility of this research, Dr. Milindi Sibomana, Impact Director at One Acre Fund Rwanda said “This enables a better understanding of our farmers, allowing us to enhance our service to them.”

Farm system and use rates of promoted technologies

In the regions studied, farm sizes were typically very small (median 0.3 ha) and 84% of households farmed less than 1 ha. Livestock ownership was also generally low, and cattle ownership appeared to indicate a step-change in wealth, where households who owned a cow were considerably wealthier than those who did not. The major crops cultivated were maize, beans, sweet potato, cassava, vegetables, banana, cocoyam, and sorghum. The median number of crop species planted was 6, and the median number of livestock species owned per household was 1.

It was found that urea and DAP were the most heavily used fertilizers, used by 50–60% of households. Less commonly used was NPK, ranging from 14 to 27% of households. Improved seed (maize, bush beans, and climbing beans) was used by about 40% of households, without much variation between provinces. The liming agent Travertine was uncommon, used by 6–12% of the study population.

This research was supported by the Belgian Directorate General for Development Cooperation and Humanitarian Aid (DGD) through the Consortium for Improving Agricultural Livelihoods in Central Africa (CIALCA). The research forms an integral part of the CGIAR Research Program on Roots, Tubers and Bananas (RTB) which is supported by CGIAR Fund Donors.